Background: Cytogenetics is one of the most important prognostic factors in acute myeloid leukemia (AML). Monosomal karyotype (MK), defined as two or more distinct autosomal monosomies or one single autosomal monosomy in the presence of at least one structural abnormality, has been identified as a new cytogenetic category associated with particularly poor prognosis (Breems, JCO, 2008). AML patients (pts) with MK+ have shorter overall survival (OS) compared to other unfavorable karyotypes, irrespective of treatment intensity. However, preliminary results from a phase II trial of decitabine (DEC) as first-line treatment for elderly AML pts demonstrated that an objective response rate (CR+PR) in MK+ pts was higher than in the MK- cases with abnormal cytogenetics. Moreover, the OS of MK+ pts was comparable to that of MK- pts (LÃ¼bbert, Haematologica, 2012). This observation might suggest a positive effect of DEC in patients with MK+ AML.

Objective:  To determine the effects of treatment with DEC vs low-dose cytarabine or best supportive care (BSC) as a treatment of choice (TC) on OS, progression free survival (PFS) and response rate (CR/CRp) in the subset of pts with AML MK+, who were treated in the randomized phase III DACO-16 study. A second objective is to compare the OS, PFS and CR/CRp of MK+ vs other unfavorable karyotype cases.

Results: Of 480 pts in DACO-16 study, 64 (13.3%) fulfilled the criteria for MK+ and additional 99 (20.6%) had poor-risk MK- cytogenetics. In MK+ group 33 pts received DEC and 31 pts were assigned to TC. In poor-risk MK- group DEC and TC was administered to 49 and 50 pts respectively. Baseline characteristics of treatment subgroups were comparable.

Overall survival in decitabine and TC treatment arms according to cytogenetics

Conclusions: In older patients with AML-MK+, decitabine improved CR/CRp rate and PFS compared with standard therapies. A survival analysis suggesting a benefit of about 4 months in median OS for decitabine in MK+AML needs confirmation in further studies with larger sample size. These data might suggest decitabine overcomes the extremely poor prognosis associated with MK and may be a beneficial initial treatment as an alternative to low-dose cytarabine or best supportive care.

Figure 1. PFS of patients with AML MK+according to treatment

Figure 2. OS of patients with AML MK+ according to treatment 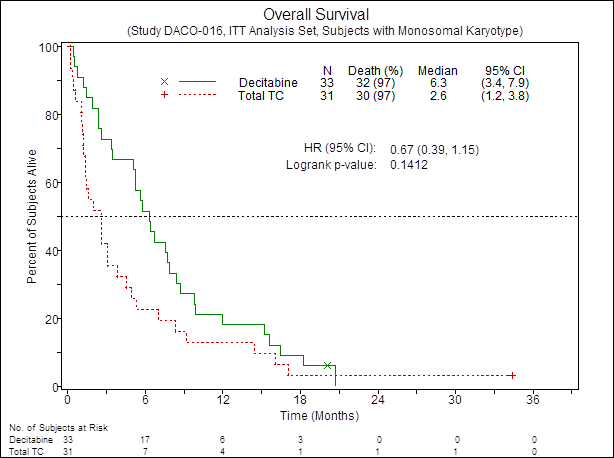