HIFU ablation was performed by the JC HIFU system [Chongqing Haifu (HIFU) Tech Co., Ltd., Chongqing, China]. Briefly, the therapeutic procedure was guided by real-time ultrasonography (US). Therapeutic US energy was produced by a transducer with a 15 cm diameter, a focal length of 15 cm, and operating at a frequency of 0.8 MHz. General anesthesia or concious sedation was necessary during HIFU treatment to prevent the patient from experiencing deep visceral-type pain and to ensure immobilization. After suitable anesthesia was induced, the patient was carefully positioned, so that the skin overlaying the lesion to be treated would be easily put in contact with the degassed water. The treatment power was increased stepwise after starting, and the ablation was terminated after the increased gray scale covered the tumour margin. 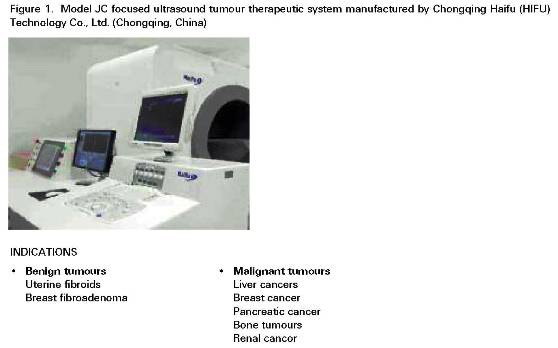 In 1942, Lynn et al1 reported for the first time use of HIFU to produce coagulative necrosis in target tissue. In 1950s, Fry et al2 conducted HIFU ablation of caťs brain tissue after removing a piece of skuli;

Recently, some research groups reported their results showing that HIFU ablation was safe, effective and feasible in treating human solid tumours345. The Group from Chongqing has reported the largest series of HIFU clinical applications to dáte, in which 1038 patients were treated with US guided HIFU in ten centers with both curative and palliative purposes6. Zhang et al.7 reported HIFU can achieve complete tumor necrosis even when the lesion is located adjacent to the major hepatic blood vessels. Indeed, there is no discernible damage to the major vessels, even though the adjacent tumor has been completely ablated. In Oxford, UK, a total of 22 patients with liver metastases were treated with USgHIFU. Using either radiological images such as MRI and contrast ultrasound, or histological examinations, 20 of 22 patients were assessed. The results revealed that the adverse event profile was favorable when compared to open or minimally invasive techniques8. This year, a feasiability study of ultrasonography imaging-guided high intensity focus ultrasound (HIFU) treatment for solid malignancies was completed in European Institute of Oncology (Milan, Italy)9; This will be the first report on HIFU treatment for solid malignant tumours from a European Comprehensive Cancer Center for defining clinical and technical indication for this technique. 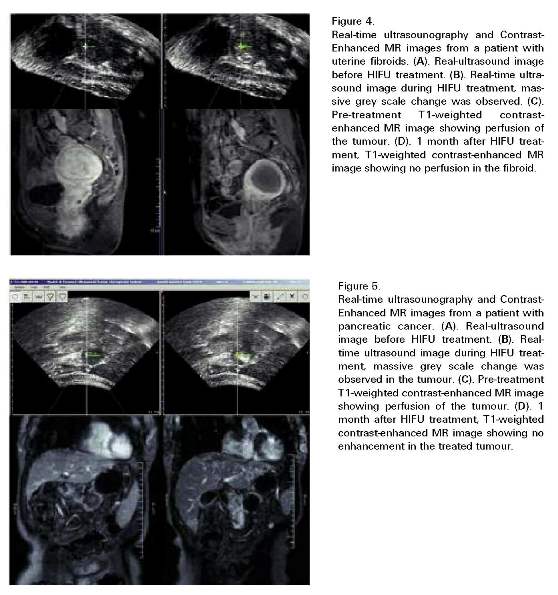 These results from different groups are exciting and encouraging. Based on the results from clinical trials and studies, we concluded US-guided HIFU ablation can achieve completely response without significant side effects, therefore, it is a safe, effective and feasible modality for the destruction of malignant solid tumours.