Background: Bortezomib in combination with thalidomide and dexamethasone (VTD) is an effective regimen in patients (pts) with previously untreated MM. We conducted an open-label phase 2 study to evaluate the efficacy and safety of VTD and VTD plus cyclophosphamide (VTDC) as induction therapy prior to high-dose therapy plus stem cell transplant (HDT/SCT) (NCT00531453). Primary results showed that both VTD and VTDC are active induction regimens resulting in bone marrow confirmed complete response (CR) rates of 29% and 31% post-induction, and 57% and 61% post-HDT/SCT, respectively (Ludwig et al. JCO 2012). There were no significant differences in efficacy between the 2 regimens, indicating no benefit from the addition of cyclophosphamide.

Aims: To assess any differences in long-term outcomes between the 2 regimens, this long-term extension follow-up phase of the study evaluated final time-to-event data: updated post-treatment results are reported. 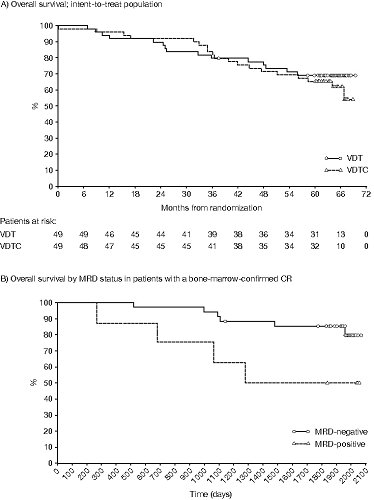 Summary/Conclusion: The VTD induction regimen followed by HDT/SCT provides long-term disease control (median TTNT 51.8 months, 5-year OS 69.1%). Consistent with the primary analysis results, there was no significant difference in long-term outcomes between the VTD and VDTC groups. Analysis of OS and PFS by MRD status confirms the importance of achieving an immunophenotypic CR after treatment.