Aims: To verify the importance of rituximab maintenance in MCL first line treatment. 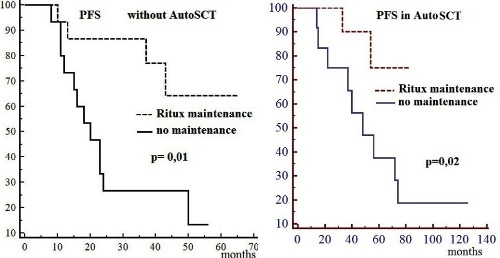 Summary/Conclusion: Even though the numbers of our analyzed patients are small, we can observe that in newly diagnosed MCL patients responding to the initial induction therapy (R-CHOP-like, R-COP), the administration of RM significantly prolongs PFS in both Autologous SCT treated patients and in those non-intensified. The data are not mature enough to asses the overall survival.