Background: Lytic bone destruction is a debilitating manifestation of MM. In addition to its anti-MM activity, data suggest that Btz inhibits osteoclastogenesis and stimulates osteoblast activity, exerting positive effects on bone metabolism that may be bone-specific and independent of the effects on MM. This is the first randomized study of Btz with a bone-specific endpoint.

Methods: Consenting adults with newly diagnosed MM who had achieved partial response or better (≥PR) after single/double HDT-ASCT were eligible. Pts were randomized 1:1 (stratified by age [<65 vs ≥65 yrs] and baseline bisphosphonate [BPP] use), to 4 x 35-d cycles of Btz 1.6 mg/m2 IV on d 1, 8, 15, 22, or Obs alone. BMD was measured in spine/femur at baseline, after 2 cycles, and at EOT by dual energy X-ray absorptometry; data were centrally assessed. Serum samples were acquired at these same time points for bone biomarker and M-protein measurement. For pts with missing assessments, a last observation carried forward (LOCF) approach was used. Response was assessed by IMWG 2009 criteria. Adverse events (AEs) were graded by NCI-CTCAE v3.0. Analysis was mainly by intent-to-treat (ITT), including all randomized pts who received ≥1 dose of Btz (Btz arm), and in pts who had a baseline and ≥1 post-baseline BMD assessment. 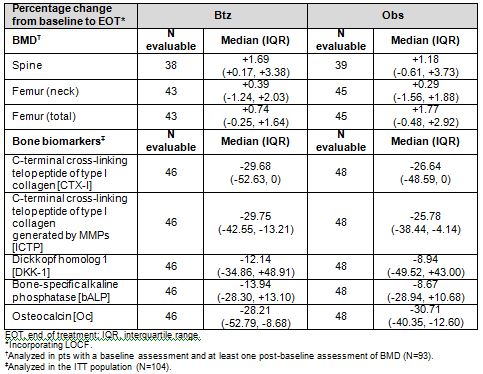