Intensity-modulated radiation therapy (IMRT) offers the potential of highly conformal dose distribution that allowed improved sparing of healthy tissues. Contrary to the three-dimensional conformal radiation therapy (3D-CRT), IMRT is able to combine both spatial beam shaping and fluence modulation across the beam. Severe late toxicity after curative radiotherapy for low-grade gliomas has been observed even with recommended doses ranging from 45 Gy to 55 Gy. Although the incidence of brain necrosis is rather low, it cannot be regarded insignificant.
The aim of this study was to compare target volume coverage and normal tissue sparing of the IMRT and 3D-CRT techniques in the treatment of low-grade gliomas.

Ten patients with supratentorial low-grade glioma were selected for this planning study. The main aim of this research was to determine the possibility of brain tissue sparing with different treatment techniques. That is why the patients with tumors in close proximity to the eyes (anterobasal parts of frontal lobes) were not included in order to avoid the necessity of sparing other critical structures beyond brain. Postoperative radiotherapy was given to three patients while seven patients were primarily treated with radiotherapy following stereotactic biopsy of the tumor.
The gross tumor volume (GTV) included the tumor volume as defined by magnetic resonance (MR) scan. In patients treated postoperatively, the preoperative tumor volume was delineated. A uniform margin of 15 mm was added to the GTV using an automated volume expansion to create the clinical target volume (CTV). Another 5 mm margin was supplemented to the CTV to define the planning target volume (PTV). Finally, the PTV contour was adjusted where necessary in order to conform the PTV to the natural barriers of tumor spread (bones of skull, tentorium).

Treatment plans were generated using a 3D treatment planning system (CadPlan R.6.3.6., Varian Medical Systems, Inc., Palo Alto, CA) with 6 MV photon beams. All patients were planned and irradiated with a 3-field 3D-CRT technique. Beam arrangements consisted of two wedged opposed fields (90°, 270°) and a parietal field with variable angle, ranging from 35° to 90° according to the tumor location. The PTV was then displayed using beam(s eye view (BEV) mode and the individual beams were shaped with a multileaf collimator (MLC). A margin of 8 mm was left between PTV and the leaves of MLC accounting for beam penumbra.
Another two IMRT plans were created for each patient in this planning study. A 3-field IMRT plan (IMRT 3F) had a beam arrangement equal to the 3D-CRT plan. A 5-field IMRT plan (IMRT 5F) used the very same three fields as a basic set-up. Two additional fields were added on both sides between the lateral and parietal fields. These oblique fields were angled (table rotation +45° and -45°, appropriate gantry rotation) so that the central axes of all five beams were coplanar. The inverse treatment planning was performed using the Helios module, which is an integral part of our 3D treatment planning system. A single constraint was defined for the PTV 100% of the volume should receive a minimum dose of 51.3 Gy, corresponding to 95% of the prescribed dose. This requirement was weighted with maximal priority (100). No attempt was made to constrain the dose to surrounding brain tissue.

Both 3D-CRT and IMRT plans were normalized to the ICRU point (isocenter). A total dose of 54 Gy in 30 fractions was prescribed to the ICRU point. The IMRT fields were delivered with a dynamic multileaf collimator (2x26 leaves) using the sliding window technique. For valid comparison of the plans, the basic optimization condition was to cover the entire PTV with 95% isodose. Moreover, the maximum dose should not exceed 107% of the prescribed dose.

Overall, three plans were produced for a particular patient (Figure 1). Dose-volume histograms (DVH) were generated for the PTV and brain. Nothing but brain tissue outside PTV was considered for the DVH calculation. Thus the PTV was subtracted from the brain volume. The percentage of the PTV covered by 95% isodose was registered in order to assess the homogeneity of dose distribution. Conformity index (CI) was calculated according to the equation described by the ICRU Report 62. The volume of the 95% isodose was regarded as the treated volume (CI = VPTV/V95%). The volumes of brain (BV) irradiated to a dose of 10 Gy (BV10), 20 Gy (BV20), 30 Gy (BV30), 40 Gy (BV40), and 50 Gy (BV50) were recorded. Plans were compared using mean dose-volume statistics. A two-tailed Student’s t-test was used to detect the differences between treatment plans. Differences were reported as statistically significant with a p value less than 0.05. To quantify the fraction of brain encompassed by the therapeutic 95% isodose volume, the normal tissue-sparing index (NTSI) was calculated (Miften MM, et al. J Appl Clin Med Phys 2004;5:1-13). Finally, the Lyman model was used to calculate the normal tissue complication probability (NTCP) and to project the risks of brain damage. Following parameters were entered for the calculation: TD50 = 60 Gy, m = 0.15, n = 0.25. The fraction of irradiated brain volume was determined by the method of effective volume as proposed by Kutcher and Burman.

Relatively simple IMRT techniques with coplanar beam arrangement showed a significant brain sparing in comparison with the 3D-CRT technique. Regarding the development of late toxicity, IMRT may be beneficial for the longterm survivors with low-grade gliomas. 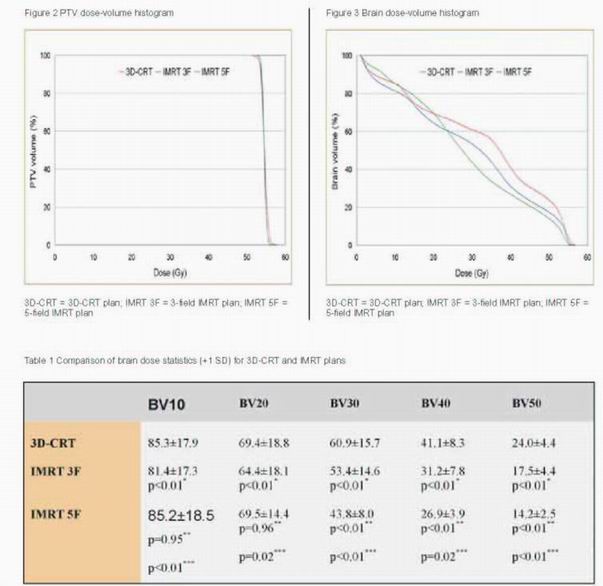 The p values denote statistical significance of the two-tailed Student’s t-test comparison of the treatment plans: 3D-CRT vs. IMRT 3F*, 3DCRT vs. IMRT 5F**, and IMRT 3F vs. IMRT 5F***.